Mergers and acquisitions and interdependencies between companies, what is the evidence in Japan?

Merger and acquisition is one way for companies to grow. By increasing their size and expanding the range of business, companies are able to exercise a greater level of control on external resource and increase their customer base. For example, it is common for a gas wholesaler’s to acquire gas retailer to broaden the customer base. Furthermore, there are also cases of mergers and acquisitions among real estate brokering companies, chemical wholesales and construction companies, in order to consolidate their supply chain and increase sales.


Recent research on mergers and acquisitions has found evidence to support the “interdependence theory”.(*1) The theory suggests there is a greater probability of a merger/acquisition if there are high levels of interdependence between two companies. This probability decreases if there is an imbalance in power between the two companies or one-sided dependence with a particular resource. This theory was tested and verified using corporate data in the US.


A similar analysis was undertaken in Japan using Teikoku Databank’s credit research data. In a simplified model of the economy with three companies, Company A and C’s dependence on Company C can be calculated as the Company A’s share of sales directed to Company C plus Company C’s share of purchase from Company A.(*2)

More specifically Company A’s dependence on Company C can be represented as: 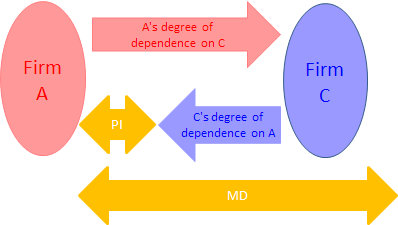 The explanatory power of mutual dependence (MD) and power imbalance (PI) was tested using regression analysis of mergers and acquisitions data over the period 2013-2015. Consistent with theory and other evidence, it was found that MD was positively and significantly correlated with mergers and acquisitions, while PI was negatively and significantly correlated.


Building on this work, it is possible to make predictions on which industries are likely to experience high levels of merger and acquisition activity. This is marked as an area of future research.(*3,4)

2 The inter-firm trading relationship was used to build TDB’s own Input-Output (IO) tables. TDB’s IO tables were used in calculating mutual dependencies and power differences in this project.

3 Ministry of Internal Affairs and Communication. 2009. What is an input-output table?. Available at http://www.soumu.go.jp/toukei_toukatsu/data/io/t_gaiyou.htm.