As Tokyo gears up to host the 2020 Olympics games, there has been considerable discussions on the economic impact of the games. History can be used as a guide in answering this question. Using Teikoku Databanks corporate yearbook, Teikoku Databank in collaboration with Tokyo Institute of Technology carried out detail analysis of how the industrial structure of Tokyo has changed from the previous games, held over half a century ago.

How much did Tokyo grow following the Olympics games in 1964?

Table 1: Growth and sales and employment pre and post 1964 Olympics

How has the industrial structure of Tokyo changed 50 years post-1964 Olympics?

This change in the industrial structure is also visible in the word-cloud compiled using the words that frequently came up in describing the activity of a business. 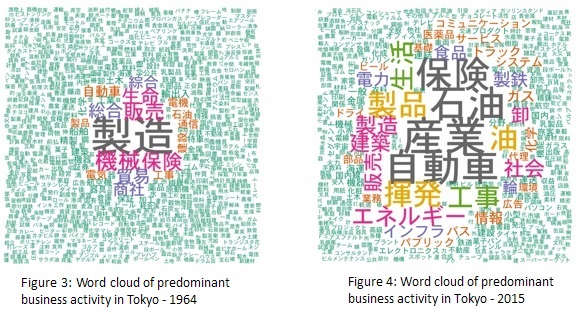 Characteristics of companies that have continued to exist

Looking at the distribution of the growth rate i.e. value in 2015/value in1964 shows that companies have increased labor productivity over this period. Possibly by way of capital deepening, flexible management methods, company mergers, and letting go of unprofitable components of the business.

The majority of companies that have continued to exist over the 50 year period have increased sales while maintaining the number of employees. However, a few companies, such as the well-reputed wholesaler of air conditioning and heating equipment, have been successful in increasing the number of employees and sales. With Japan facing a population crisis, increasing labor productivity has been taken up as an important management indicator. However, there should also be a focus on the companies that have been supporting the Japanese economy, by creating employment opportunities. 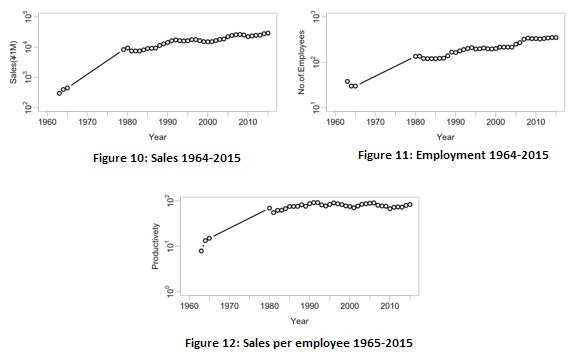