The use of business big data to identify network relationships and the study of how it changes over time was first promoted in Japan Broadcasting Corporation’s (commonly referred to as NHK) special documentary titled ‘Disaster Big Data II – barriers to reconstruction and the key to the future’ (震災ビッグデータII 復興の壁 未来への鍵), broadcasted in 2013. The documentary used Teikoku Databank’s (TDB) inter-firm transactions data to evaluate not only the immediate economic losses from the Great Earthquake but also the transmission channels by which it affected the region and greater Japan. The documentary firstly highlighted the existence of firms that are at the core of multiple transactions. Secondly, the documentary showed how inter-firm company transactions data can be used to formulate targeted policies to increase the speed of recovery.

Using the power of inter-firm networks relations for reconstruction

A company often knows its immediate business partners, but has very little understanding of its business partner’s business partners and their business partners and so on. Given this, it is difficult to fully understand the transmission channels by which a shock affects the economy. However, by using TDB’s inter-firm transactions data it is possible to construct an inter-firm trading network. From this, the transmission channels of a shock can be better understood. For example, if an influential company improves its performance, or makes a large investment, it is possible to evaluate the degree to which it spills over to other companies in the network. In the case of public support programs, a good understanding of the transmission channels coupled with a carefully targeted program will allow for the investment costs to be recovered. Big data on inter-firm transactions also allows a better understanding of the nuances in business relationships that arise due to variations in industry, scale, and distance.

Combining these insights, the analysis of inter-firm transactions data showed that there were 20,000 companies in the disaster area with 220,000 transactions prior to the earthquake. Post-earthquake the number of transactions had declined to 200,000. This considerable reduction in transactions highlights not just a regional impact but a national impact of the earthquake. Any subsequent regional reconstruction/revitalization efforts in the region will need to carefully consider which points of the network should be targeted in order to increase the speed of reconstruction and recovery.

One key observation when looking at inter-firm transactions data was the existence of companies that are at the core of a large number of inter-firm transactions. These companies with multiple transactions with customers and suppliers within and outside the region were identified as ‘connector-hubs’. They transmit and multiply the merits of any expansion and similarly transmit losses occurring in and outside the region. The documentary identified that by understanding the characteristics of these connector-hub companies it is possible to formulate more efficient and targeted support programs that accelerate the revival of companies in the disaster area. 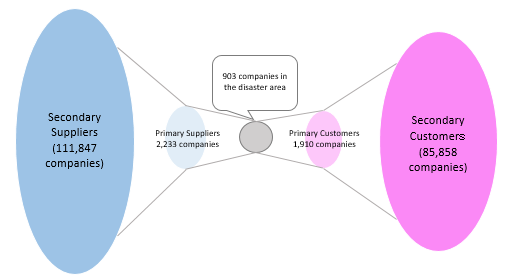 Figure 1: Primary and secondary suppliers and customers of companies in the disaster area
※The disaster area is limited to the following areas Miyako, Kesennuma, Rikuzentakata, and Ishinomaki

Simply counting the number of transactions by region gives a clearer picture of the industrial make-up of the region and the dependencies on the other companies. For example, the eminence of Miyagi prefecture as a major player in the ‘marine product processing industry’ was confirmed at the time of the earthquake. The industry had comparative levels of transactions as a large-scale company. The number of purchases within the region is large as is the sales outside the region confirming the important role ‘marine product processing industry’ plays as a hub in the region.

Regional companies are connected to each other by their trading relationship. Connector-hub companies which account for a considerable number of all trading relationships, help connect companies to the national inter-firm trading network. Given this, companies in the Tohoku region were found to be well integrated to the agriculture, forestry and fisheries, automobiles and electric machinery market networks across Japan.

Inter-firm trading network, constructed from inter-firm transactions data, are a valuable map of how companies are connected with each other. Furthermore, the identification of connector-hub companies provides useful information on the companies that are likely to multiply the merits of an expansion given their high degree of connectedness in the network. In the big data era, this is valuable information for national and local government policy planning and decision making.

The NHK documentary was the first to show how inter-firm company transactions data could be used to formulate targeted policies, paving the way further analysis using this rich dataset.